Knowing your tsunami risk means knowing what a tsunami is and if where you live, work or travel to may be a place where tsunami can impact.

The frequency of tsunami in NSW are very low but the consequences of a tsunami can be devastating as witnessed in Indonesia in 2004 and Japan in 2011.

More information regarding tsunami can be found at Tsunami: The Ultimate Guide

What is a Tsunami?

A tsunami is a series of waves generated by a number of causes including:

Australia has been affected by over 50 Tsunami in the past 200 years.

The largest Tsunami to have affected the NSW coast in recent times occurred in May 1960 after a 9.5 magnitude earthquake in Chile resulted in a 1 metre tidal fluctuation at Fort Denison in Sydney Harbour. This caused widespread damage to marine infrastructure along the NSW Coast including damage to boats, wharves, jetties and beaches. 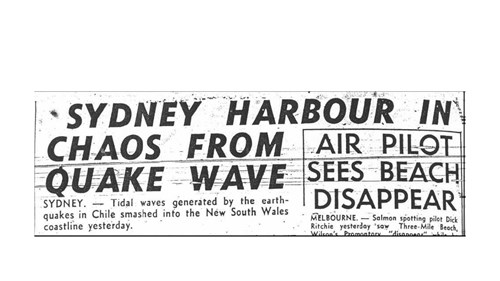 Where does a tsunami come from?

Most tsunami occur in the Pacific and Indian Oceans. The boundary of the Pacific Ocean experiences frequent earthquakes. This boundary is commonly known as the Ring of Fire. There are two major subduction zones in the Indian Ocean that can also generate tsunami.

Tsunami can be generated by a number of causes including, volcanic eruptions, undersea landslides and meteor impacts. However, undersea earthquakes are the more likely source of tsunami that could affect NSW.

Earthquakes from subduction zones are the most common source of destructive tsunami. These earthquakes are generated when two tectonic plates meet and one goes under the other, usually at a rate measured in centimetres. The sinking (subducting) plate drags against the upper plate, causing flexing. Continued stress on the plate boundary results in the upper plate rebounding to its original position, displacing the sea water above. This can lead to the generation of tsunami waves.

There is a moderate likelihood of tsunami in NSW compared with other parts of the world. Tsunami do have an effect on our coastline, Even with relatively small tsunami, there could be strong waves, rips and currents and unusual sea levels that can be dangerous.

NSW SES has developed evacuation areas across most coastal areas of NSW.

It is important to remember that these zones are evacuation areas only, NOT inundation maps.

The Joint Australian Tsunami Warning Centre monitors earthquakes that could potentially cause tsunami that affect Australia by operating an enhanced network of seismic stations nationally and has access to data from international monitoring networks. It determines the magnitude, location and characteristics of a seismic event which has the potential to generate a Tsunami.

Based on this seismic information, the Joint Australian Tsunami Warning Centre runs a tsunami model to generate a first estimate of the tsunami size, arrival time and potential impact locations.

The Joint Australian Tsunami Warning Centre verifies the existence of a tsunami using information from an enhanced sea level monitoring network of buoys situated strategically between the key earthquake zones and the NSW coastline.

The Joint Australian Tsunami Warning Centre then sends advice and warnings on any possible tsunami threat to State & Territory emergency management services, media and the public.

There is a significant risk of drowning during tsunami with either marine and land inundation threat.  This is due to the potentially dangerous rips, waves, water born debris and strong ocean currents.

The NSW State Tsunami Emergency sub plan covers arrangements for the emergency management of tsunami in New South Wales. This plan deals only with preparedness for and response to tsunami and the initiation of recovery coordination arrangements following the impact of a tsunami. The plan accounts for all tsunami magnitudes and generation mechanisms.


Plan now for what you will do