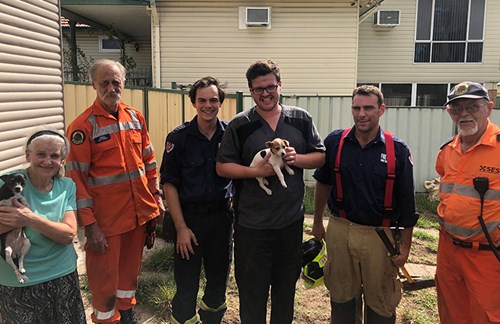 The NSW SES was called to this incident at about 14:50 this afternoon with a message stating that a puppy was trapped inside a cavity wall.

Phil Hudson Area Commander of the Port Stephens and Dungog SES told News Of The Area, “What Port Stephens SES found on arrival was that the little fella had discovered an old set of brick steps underneath a decking which had a hole in the top of it just big enough for a puppy to squeeze into and fall down a hole into the steps.”

Fire and Rescue NSW from Raymond Terrace also responded and began knocking a hole in the wall underneath the house, with a coordinated effort between the emergency services and a local vet the combined team managed to make a hole big enough for the little fella to be safely removed from his predicament with minimal damage to the house.

“The little fella was told not to do it again, and returned to his owner safe and well,” he said.

The Port Stephens Raymond Terrace Unit has a specialist large (and small) animal rescue team that is often called upon to recover domestic animals including farm animals as part of their normal combat role, most recently a cow was rescued from mud near Six Mile Road.

Port Stephens SES is comprised of a volunteer team.

Giacomo Arnott, Acting Deputy Captain, Fire & Rescue NSW Raymond Terrace Station told News Of The Area, “Our crew are very pleased that we were able to rescue the pup so quickly and reunite it with its owner.

“The owner was very thankful, and quite overwhelmed at all of the help that came to support her in saving her pup.

“With a wide range of skills and equipment, Fire & Rescue Raymond Terrace pride ourselves on being able to quickly and professionally respond to any incident and get the job done,” he said.

The Puppy and its owner are doing well.

This article was written by Marian Sampson on newsofthearea.com.au and was republished here with permission.