Urban areas, including metropolitan, suburbs and towns, can have specific flood risks including impacts of flash flooding. It is important to remember that flooding in urban areas can be very dangerous.

Preparing now for a flood can potentially save lives and can minimise damage to property and possessions.

If you live in a flash flood area, planning can be difficult as warnings may not be possible. Know the environmental cues such as heavy rainfall and pooling water which could signify possible flash flooding and act early.

When flash flooding is likely, leaving low-lying homes and businesses (evacuation) well before flash flooding begins is the best action to take, but only if it is safe to do so . If you are trapped by rising floodwater, seek refuge in the highest part of a sturdy building. Stay there and call '000' (triple zero) if you need rescue.

Flash flooding is incredibly dangerous. It is important to remember that floodwater can be faster flowing and deeper than it appears. It can also contain contaminants such as sewage and poisons, hidden snags and debris. Flash floods can also erode road and path surfaces leaving unseen dangers underneath. It is important to follow some simple measures to make sure you stay safe. The major cause of death during floods is by people entering floodwater.

Never drive, ride or walk through floodwater. Learn how to be FloodSafe in rural areas 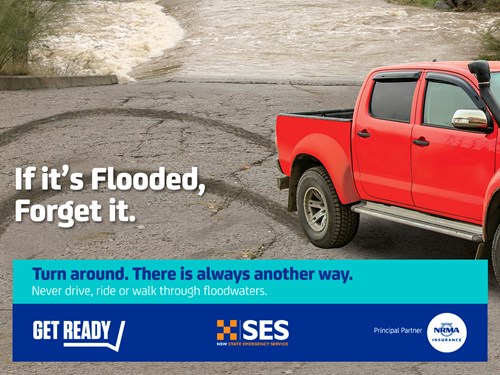 Take the time and make an emergency plan