2022 has been a wet big year for the NSW State Emergency Service (SES).  In fact it’s been the SES’s busiest year on record, with widespread, devastating flooding experienced in all corners of the State. NSW SES volunteers spent time away from their own jobs and their loved ones, to support flood ravaged communities across NSW, responding to over 80,000 requests for assistance.

There is no denying it, it’s been a difficult last few years across New South Wales. Bushfires, a pandemic, devastating floods and destructive storms just to name a few.

No one is more aware of this than NSW State Emergency Service (SES) volunteer Grace Langlands, who is also a Registered Nurse at Orange Health Services.

“I’ve been volunteering with the NSW SES Orange City Unit for the last four years after completing University,” she said.

“It’s been such a rewarding experience and one that compliments my nursing profession.”

Grace didn’t know just how much her nursing would come into play while volunteering with the NSW SES until she responded to the flooding of Eugowra in the state’s Central West in November this year.

“I was working at the hospital when I heard about the flooding situation in Eugowra, but my work let me head off immediately to assist with the emergency situation ,” she said.

“…before I knew it, I had swapped into my orange overalls and was on a helicopter heading into Eugowra as an SES Flood Rescue Operator.

“As soon as my team and I landed, we started doing reconnaissance of houses and found a resident who had chest pain. As a nurse I assisted straight away administrating medical aid until Paramedics arrived.

“Due to my medical background, the Paramedics from NSW Ambulance asked me to assist at the field hospital they had set up to assist patients.

“The best way I can describe that night in Eugowra was to liken it to a war zone.

“The pure force of the water and the destruction it caused is something I will never forget.”

Grace said the friendships she has formed with other members of the NSW SES Orange City Unit has helped her with the aftermath of the Eugowra flood.

“Time has certainly helped, and I am moving on but the first few days after the flooding was hard to process,” she said.

“ So many of the volunteers from my unit have become close friends to me, I even arrived in an SES truck to my own wedding and had an escort of SES vehicles.

“My wedding was during Covid so it was a nice touch to be able to have my orange family a part of my special day.” 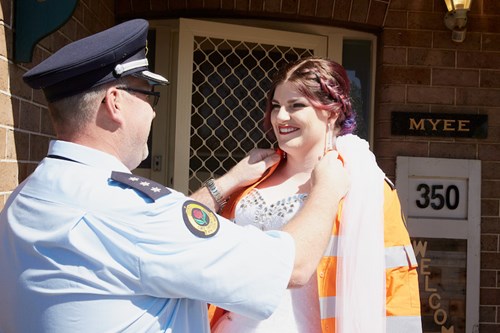 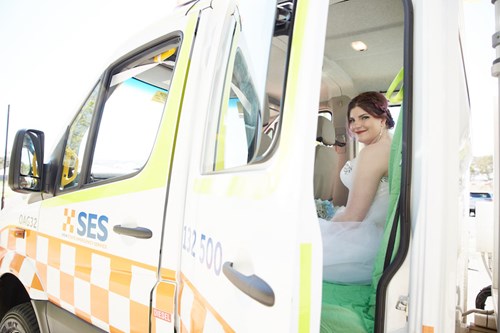 Callum Cope is one of our many volunteers who has spent his fair share of the year deployed to other parts of the State, including assisting with the flood efforts in northern NSW, and later in the year responding to record breaking floods in his own patch.

Callum, the Deputy Commander of the NSW SES Orange City Unit, has been a volunteer for over eight years, joining straight out of high school as a teenager. In that time, Callum has jumped at every opportunity to learn new skills including Storm and Water training, General Land Search, gaining his boat license and also becoming an In Water Flood Rescue Operator.

In March this year, Callum received a call to drive from Orange to Grafton to assist with the unfolding flood incident occurring in Northern NSW. A crew of three members from Orange and Parkes accompanied Callum as they made the journey up north.

“Due to the severity of the flooding, we could only make it to Grafton before the roads were closed,” he said.

“We found a spot to sleep on the floor of the SES Grafton Unit before we boarded a helicopter the next day to Goonellabah where we were then deployed to West Ballina.

“We had no idea what we were in for, we just knew we wanted to use our skills to help those in need.

“We were wading through knee to waist height deep water going up and down the street evacuating elderly residents who were stuck in their homes and people’s pets.

“Being from Western NSW, I can tell you I had never experienced tidal flooding before, it was so different to the type of flooding I was used to, it swirled from all directions and was fast moving.

“Throughout my time with the NSW SES I have been on many deployments, but nothing prepared me for what I saw. From the air all I could see was an inland brown ocean, it really was shocking. “

Callum admits this year has been his busiest year yet with the NSW SES.

“Our work this year has not stopped,” he said.

“Every week we have been responding to some form of emergency including General Land Search, storm and of course flood. Then in September flooding started out near my hometown of Orange.”

The NSW SES Orange Unit has been assisting many neighbouring SES Units over the last few months with major flooding occurring in Central West NSW.

Callum said his unit had been busy working with many other SES Units with the ongoing flooding including the terrible flash flooding at Eugowra, which is about 40 minutes from Orange.

“We flew volunteers in to assist with the rescue of residents,” he said.

“I was coordinating and managing flights in an out of Orange Regional Airport of the residents evacuating Eugowra.

As the Deputy Commander of the Orange City Unit, Callum has said his time at the NSW SES has taught him so much including leadership skills.

“I had great mentors show me the ropes when I first joined, as I’ve continued up the ranks it’s now my turn to give back to the new volunteer recruits and to share my knowledge and be the mentor for them, he said. 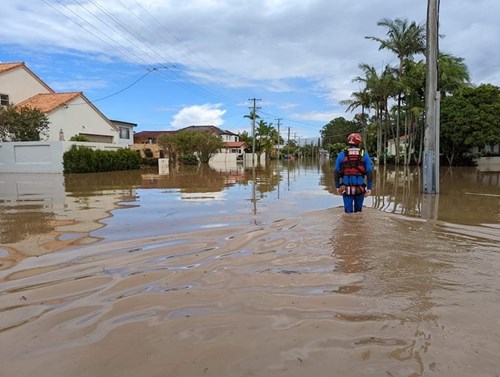 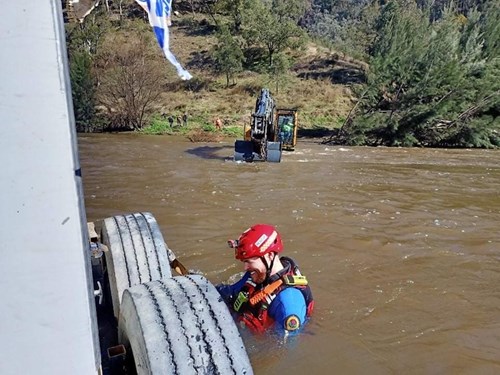 For Liverpool Unit volunteer, Ally Steen, 2022 was a year like no other. Not only was she appointed Unit Commander during the busiest year on record for the NSW SES, but she saw her unit respond to five significant flood events within the Liverpool local government area (LGA). The unit conducted 29 flood rescues and responded to 1,103 requests for assistance, which is nearly four times the 336 jobs that they were tasked to last year.

“It has been a turbulent year for our unit and the people who live in our community,” Inspector Steen said.

“Records show that the Liverpool area has never experienced more than one significant flood in any given year.

“I am proud of how our volunteers have stepped up the challenge and kept our community safe.

“The community was lashed with substantial amounts of rainfall that resulted in flash flooding in areas that never flooded before, and the Hume Highway was submerged under nearly a metre of water.”

Joining 11 years ago as a university student, Ally has progressed through countless roles and positions to be appointed the unit’s first ever female Unit Commander. Ally says her experience in the SES has helped her improve her skills as a paramedic.

“I have learnt invaluable skills such as team leadership and management, as well as the ability to scan a scene, evaluate it sequentially and jump into action mode,” Inspector Steen said.

“So much of the training and skills that we provide to volunteers transfer to so many real-world applications.”

The Liverpool area brings people from a variety of culturally diverse backgrounds and Ally is passionate about ensuring that volunteers are well placed to serve the community.

“In the past five years, the demographic of the unit has changed with more members joining from different cultural groups,” she said.

“This has changed the way we communicate with the community, adding extra depth and allowing us to proactively deliver potentially life-saving flood and storm safety messaging.”

Ally says it has been a busy year with a record number of volunteers from her unit deploying out of area 36 times to assist regional flood operations. They have also been busy with four intakes of new recruits and training flood boat operators.

“The Liverpool community is expected to undergo major change over the next few years with major developments such as the Western Sydney Aerotropolis and thousands more homes being built,” Inspector Steen said.

“The area will be unrecognisable in a few years, and as more infrastructure is built and people flock to the region, floods and storms are set to impact on the community on a whole different level.”

Ally’s message to members of the community who are interested in becoming a volunteer is to just give it a go.

“This past year has shown that no matter the size of your contribution, you can make such a massive difference to the community, whether you are a flood rescuer or someone who works in the background in the unit.

“There’s never been a more exciting time to join the NSW SES.” 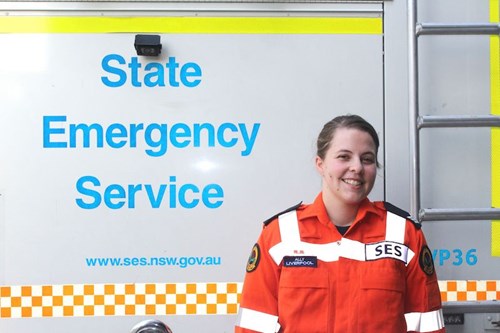 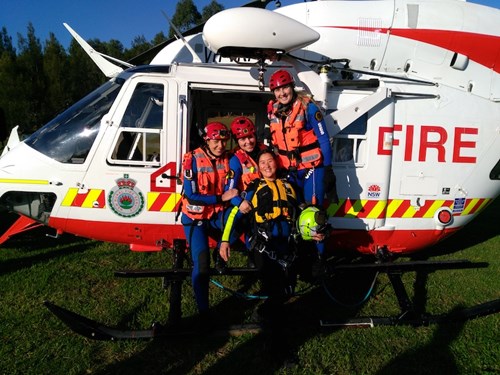 NSW State Emergency Service (SES) volunteer, Brendan Stent joined The Rock Unit a year and a half ago, right in the middle of the SES’s busiest period on record, thanks to three consecutive La Nina events, which caused widespread flooding across NSW.

Brendan brings expertise to the Service from his previous career in the military as medic for the Rotary Wing Aeromedical team.

“I decided to join the NSW SES as I had skills that I could transfer from my previous role in the military to helping my local community,” he said.

“I’m trained in responding to emergency responses so being able to help whether it be a General Land Search or responding to a Road Crash Rescue in the SES is something that appealed to me.

Those ‘skills’ also include specialist training in driving the NSW SES’s new state of the art High Clearance Vehicles (HCV’s), also used in the military, which can access flooded and isolated areas by road which were once too dangerous to reach.

“During my time with NSW SES I’ve responded to the inland flood emergency by driving the HCV into flood affected communities including Hay and Deniliquin which otherwise we couldn’t have reached,” Brendan said.

Brendan also responded to the flash flooding which occurred in Cootamundra in October this year, where he evacuated people and pets from more than 100 properties.

“I used to live in Far North Queensland for many years before moving to The Rock so I have seen my fair share of flash flooding but the flooding which occurred in Cootamundra hit so quickly,” he said.

“The street went from being completely dry to mid-thigh deep in less than an hour.

Brendan, who now works as a special technician at Wagga Wagga Base Hospital, says volunteering with the NSW SES has been a rewarding experience.

“I’ve found the camaraderie in the NSW SES is similar to being in the military,” he said.

“What we do and the way the SES responds to incidents is different to normal civilian work and I have made some nice mates since I joined.”


See yourself in orange? Make it your new year’s resolution to become an NSW SES volunteer. For more information click here.