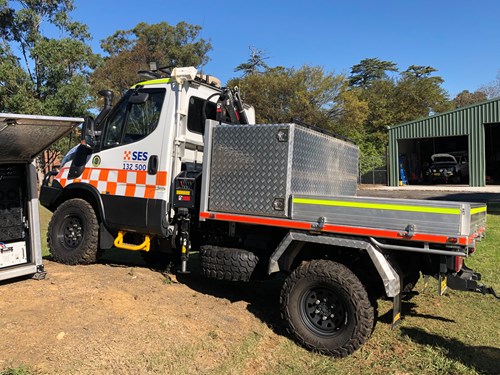 Four new NSW State Emergency Service ‘Cell on Wheels’ trucks, designed to help keep emergency radio communications up and running in a crisis, will be built by the end of September at a cost of $1M.

The NSW SES trucks, called the ‘Cell on Wheels’ and affectionately known as the ‘CoW,’ cost $250,000 each and will be rolled off the production line with the support of the NSW Telco Authority.

The CoW is the first ever agency-led mobile government radio communications site. The Government Radio Network or GRN is the platform that NSW government agencies and authorities use to talk to each other during emergencies.

The CoW was deployed to various locations across the state during the recent bushfires, including places near Port Macquarie, Batemans Bay and Braidwood.

NSW SES Commissioner Carlene York said that the CoW allows emergency services like the NSW State Emergency Service, NSW Rural Fire Service, Fire + Rescue NSW and Ambulance NSW to continue communicating with each other using mobile radios even when the power or network is disrupted during disasters.

“We’re rolling out another four CoW trucks to ensure that our emergency services can continue to save lives and protect the community of New South Wales during natural disasters,” said Commissioner York.

Designed by the NSW SES and built in collaboration with the NSW Telco Authority, the CoW is a rugged 4x4 truck that is built to handle tough terrain, rough weather and can be transported by helicopter if necessary.

“It has its own satellite link and generator so it can operate independently of normal infrastructure,” said Commissioner York.

“The CoW is designed to get into rugged, hard-to-reach places and can run for up to nine days. When normal infrastructure has been damaged during a disaster, it helps to keep radio communications up and running for all emergency services over an area of up to 40km radius, dependent upon the terrain.”