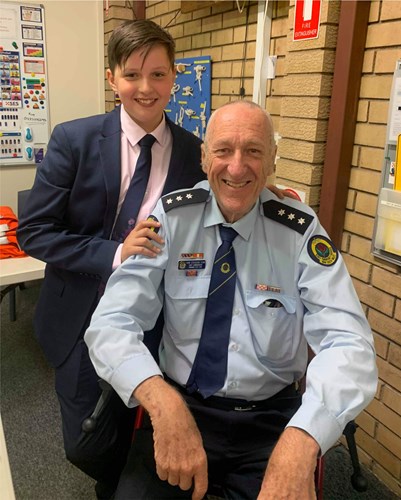 Last night a pillar in the Orange Community, NSW SES Orange City Unit Commander Kim Stevens stood down from his role as Commander, handing the reigns over to his son Robert.

After 51 years of service to the NSW SES, 19 as the Orange City Commander and tirelessly helping others, it’s time for Kim to focus on himself. Last year Kim was diagnosed with Motor Neurone Disease (MND), a condition which affects the nerve cells (neurons), causing weakness in the muscles that continues to worsen over time.

Kim’s interest in the NSW SES started at an early age when as a teenager in Lismore, he did the unthinkable and went to school when it was closed due to flooding.

He built a raft from garbage tins and paddled around the school, checking that the various buildings were not being inundated above expected heights. This kick-started his interest in helping the community, especially with NSW SES and water-related rescue. 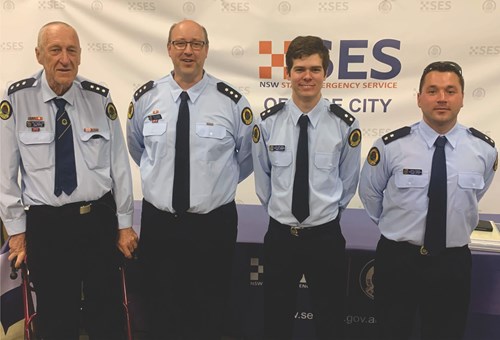 Kim was not the only community minded member of his family. His passion for the NSW SES came from Kim’s father, who was also heavily involved with the NSW SES through one of his other great passions, radio communications, and started what was to become a lifelong interest.

Kim has also passed his passion for helping his local community onto his son Robert, who will be taking over the reins from his Dad as the NSW SES Orange City Unit Commander.

“My Dad is always the first to help someone and always gives his time to others, that’s what has made him such a great Unit Commander for so long. He is an eloquent guy that commands the room with his presence as soon as he walks in,” said Robert.

“My Dad has passed his passion for the NSW SES onto me from a young age. I’ve spent time at the unit from when I was a 2 year-old, sitting under the table as Dad was working on the radios.

“This is by no means a retirement from the NSW SES for Dad. He will be an active NSW SES member to the day he dies. The effects of MND are starting to take its toll on Dad and it’s time that he looks after himself.

“My own son is 12 years old and can’t wait to join the NSW SES and follow in his Great Grandad’s, Granddad’s and my footsteps,” Robert added.

Kim’s interests continued when he moved to Orange and became the Unit Communications Officer for the NSW SES Orange City Rescue Squad. He soon moved to the incident management side of the service, being involved in one of the early large storms in Orange with 150 jobs over three days.

Kim says that he is proud to be handing the reins over to Robert.

“Handing to the baton over to Robert is a proud moment for me,” said Kim. “He spent many years putting up with his Dad being in the service. I’m proud of the immense amount of knowledge that he has gained.”

NSW SES Deputy Commissioner Operations, Greg Newton, thanked Kim for his dedication to the NSW SES and the local community as his time as the NSW SES Orange City Unit Commander.

“Kim’s service to the NSW SES over the last 50 years is a testament to his passion for the NSW SES. His wisdom and expertise as a volunteer of the Service is second to none. While he won’t be the Commander any more, I’m excited that he will still be an active member of the NSW SES. He will be passing his skills on as a mentor to other volunteer members of the Unit,” said Mr Newton.

Kim’s experience in emergency management is also highly regarded by his peers in other emergency agencies, where he has assisted the NSW Police Force with searches both local and abroad, on land and water.

Two of Kim’s colleagues from the local Fire + Rescue NSW Orange station will be climbing the Sydney Tower Eye on 9th November to raise money for Motor Neurone Disease research at Macquarie University. Find out more at https://firiesclimbformnd.org.au/


Are you ready to get involved? Apply Now