Five east coast low events off the NSW coast brought significant rainfall to much of the NSW coast and adjacent ranges, and resulted in major flooding across much of the Central Coast, lower Hunter and the Goulburn area of the Southern Tablelands. 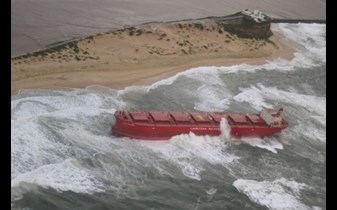 The storms commenced on Friday, 8 June 2007, following the development of an intense east coast low pressure system overnight. Over the next 36 hours parts of the Hunter and Central Coast areas were battered by the system's strong winds and torrential rain, which caused extensive flooding, damage and loss of life. The strongest observed wind gusts were 135 kilometres per hour (84 mph) at Norah Head and 124 kilometres per hour (77 mph) at Newcastle.

The unladen bulk carrier MV Pasha Bulker ran aground on Nobbys Beach at Newcastle, after the boat failed to move out to sea in enough time to escape the approaching storm. The Newcastle Westpac Rescue Helicopter Service used both of their aircraft to winch the Pasha Bulker crew of 22 to safety, transporting them to Nobbys Beach parking lot.

On the evening of Sunday 10 June, approximately 4,000 residents in riverside communities of central Maitland, South Maitland and Lorn were forced to evacuate their homes in anticipation that the Hunter River would breach its levee system. Evacuation centres were set up at East Maitland and Maitland High School.

There was also extensive flash flooding in and around Newcastle, resulting in cars being washed into stormwater drains, fallen trees, underground carparks flooded and damage to low-lying homes and businesses.

The storm caused major flooding, strong winds, high seas and A$1.6 billion in damage, making it Australia’s eighth most expensive disaster in the last 50 years (Insurance Council of Australia).

Nearly 6,000 SES volunteers, including crews from across New South Wales, ACT, Queensland and Victoria worked in the area, responding to over 10,000 calls for assistance from members of the public.

The total death toll from this severe weather event was ten.

The New South Wales Premier, declared a natural disaster for the affected areas. More than 105,000 homes had been left without power. Rainfall had exceeded 300 mm (12 in) in the Hunter region and 200 mm (8 in) in parts of the Central Coast and Sydney.

NSW recorded a statewide average rainfall of 92.7 mm during November, double the historical average of 44.9 mm and the 7th wettest on record, although lower than November 2010 (105.5 mm).

Most of the rain fell between the 22nd and 26th of the month, as a low pressure trough brought moist tropical air into the state, triggering heavy falls across NSW. Rain was particularly heavy in the northeast, with daily falls as high as 190.5 mm at Gwyder River on the 26th, resulting in a 4-day total of 302 mm. The heavy rain triggered flooding in northeastern NSW, including significant flooding around the major centres of Gunnedah and Moree, with Natural Disasters declared for the Armidale, Inverell, and Moree Plains shires.

NSW recorded a statewide average of 87.7 mm during January, above the historical average of 67.3 mm and the 15th wettest on record.

NSW recorded a statewide average rainfall of 99.7 mm during February, well above the historical average of 50.7 mm and the 13th wettest on record. Rainfall was above average across most of the state, with the wettest February on record at Cooma, Murrurundi, and Bowning.

The first major rainfall event was at the start of the month, as an inland trough system and easterly flow triggered several days of heavy rain over northeastern NSW between the 1st and 3rd of February.

Further moderate rain fell along the east coast between the 8th and 15th, with localised reports of flash flooding, associated with thunderstorms triggered by a further low pressure trough. An additional period of thunderstorm activity was triggered by a low pressure trough between the 17th and 20th, with moderate falls across much of central and eastern NSW, particularly on the 20th and 21st.

From the 27th, a slow-moving low pressure system moved into the state, associated with an upper trough and a moist northerly airstream. This triggered widespread rainfall across southern NSW on the 28th and 29th, including the wettest February day on record at several stations, with daily falls as high as 123 mm at Coolamon on the 29th. At Coolamon, Grong Grong and Mulwala this was the wettest day on record for any month.

NSW recorded a statewide average rainfall of 119.59 mm during March, well above the historical average of 48.97 mm. This was the second wettest March on record for the state, following 155.31 mm during March 1956.

Most of the rain fell during the first week of the month as a low pressure trough brought very heavy rain across the state. Most of NSW recorded at least 50 mm between the 1st and 5th of the month, with large areas recording more than 150 mm, with a 5-day total of 97.94 mm averaged across the state. This event broke daily records at 23 locations, but was particularly important in terms of accumulated totals, leading to widespread major flooding in NSW.

A short-lived East Coast Low brought further heavy rain to the south coast on the 8th and 9th, with daily totals as high as 134.4 mm at Lucas Heights on the 8th and as much as 40 mm in one hour at Sydney Observatory Hill, resulting in widespread flooding in the Metropolitan region. Conditions were generally dry for the rest of March, with further falls in inland NSW on the 16th and 17th but rain otherwise generally light and coastal.

NSW recorded a statewide average rainfall of 64.8 mm during February, above the historical average of 50.7 mm but the driest February since 2007, following heavy falls in recent years. Rainfall was above average in southern NSW and along the coastal strip.

A surface trough and thunderstorm activity on the 1st produced widespread rainfall in coastal NSW, with totals of up to 70.2 mm at Hunter Springs to 9am on the 2nd, with further thunderstorms producing rain in eastern NSW between the 10th and 12th and in parts of the west on the 14th and 15th.

The most significant rain event of the month occurred between the 22nd and 24th, as an East Coast Low produced heavy rain across much of coastal NSW. Daily falls reached 415.2 mm at Yarras on the 23rd, its wettest day on record for any month, with a 3-day total of over 500 mm, while falls reached 185 mm at Robertson on the 24th. This rain fell on already wet catchments following heavy rain in late January, and was associated with minor to major flooding across the Northern Rivers, Mid North Coast and Hunter regions.

In April 2015, the Hunter region, along with Central Coast and Sydney, was lashed by wild weather. It brought heavy rainfall and disrupted power supply to over 200,000 homes. The storms led to some of the most significant flooding that many residents in the region had experienced in 60 years. 4 people lost their lives as a direct result of the storms and a massive community and SES response was required to prevent further losses.

The statewide average rainfall for NSW during April was 47.0% above average, making it the wettest April since 1990. Rainfall was above average across most of the state, particularly along the south and central coasts, with some stations in the Hunter and Sydney regions recording their wettest April on record.

The most significant rainfall event of the month was an East Coast Low that developed in a surface trough off the Hunter coast on the evening of the 20th. This system caused very heavy rain, strong winds and high seas in the Hunter, Sydney, and Illawarra regions over subsequent days, contributing to widespread flooding as well as numerous downed trees, large scale power outages persisting for several days in some areas, and coastal erosion. Rainfall totals for the 48 hours to 9am on the 22nd were broadly above 200 mm, reaching 436 mm at Maitland, with wind gusts reaching 135 km/h at several coastal locations and waves as high as 14.9 m in waters off Sydney. The SES attended to more than 20,000 requests for assistance from members of the public and more than 150 flood rescues during this event, and hourly rainfall totals of over 100 mm led to major flooding along the Williams and Patersons Rivers, with several communities temporarily isolated by floodwaters. Twelve LGAs were declared Natural Disaster Areas as a result of this event.

Earlier in the month an East Coast Low in the southeast also produced widespread totals above 50 mm on the 8th, breaking April daily rainfall records at several locations, and wind gusts of 107 km/h at Green Cape. A coastal trough with an embedded low produced rain in the northeast of the state on the 4th and 5th, while a cold front and surface trough produced rain in inland NSW over the 18th and 19th. 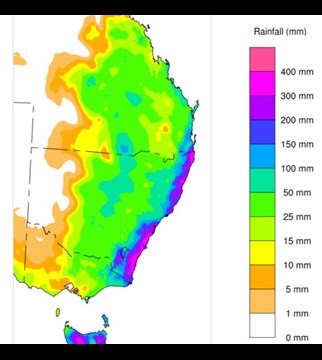 Heavy rainfall affected much of the New South Wales coast, particularly over the northeast of the State as the low pressure trough moved off the coast early on 5 June. The low intensified further, developing into a multi-centred East Coast Low.

Heavy falls were recorded along most coastal districts of New South Wales. The largest area of heavy rain along a stretch of the New South Wales north coast extended from Newcastle to Coolangatta. Daily totals for the 24 hours to 9am on 5 June exceeded 100 mm with several locations in the far north reporting rainfall in excess of 300 mm; the highest being Tweed Heads with a total of 330 mm, though locally, heavier falls were recorded at non-Bureau gauges (for example, Wooli, north of Coffs Harbour, had 468 mm in 24 hours on 5 June). Further south, totals ranged from 130 to 180 mm for many locations extending from Sydney down to the State’s south coast, several of which reporting new daily records for June. Heavy rainfall persisted along the south coast of New South Wales on 6 June.

Along the southeast Queensland and New South Wales coasts, the East Coast Low was associated with a relatively moderate storm surge; near 30 cm in the vicinity of Sydney. However, the storm surge combined with high astronomical tides and damaging waves resulted in local inundation of low-lying areas and widespread coastal erosion along the New South Wales coast.