'You get out as much as you put in with the SES so just jump in and give it a go, there's a job for everyone in the SES and there are so many different avenues you can specialise into.'

When did you join the NSW SES and how old were you when you joined?

My late grandmother actually suggested I join so I could start giving back to the community that I grew up in. So I ended up looking up what the SES was and how to join, I gave my local unit a call and I guess the rest is history now.

Why do you choose to be an SES Volunteer?

It started as just a general desire to help people out in times of need but it's so much more than that now. I love the challenges that SES provides, it pushes me out of my comfort zone to achieve amazing things. Working in a team is also really important for me and I've found there is a great sense of comradery in the SES as everyone is bonded by a common goal of wanting to help their communities in times of need which is great. I love that we are able to go out to people on what is perhaps one of the worst days of their lives and we can help resolve whatever issues they have, and in terms of rescues, we are even able to help save their lives. I honestly couldn't imagine my life without being in the SES and I count it as probably the best thing I've ever done with my life.

What is your most memorable experience in your time as a NSW SES volunteer?

Tough one cause there have been so many over the past 6 years, of the most memorable would have been the 2015 East Coast Low which hit the Northern Beaches resulting in over 1000 jobs for our unit alone within a few days. The extent of the damage was so bad that we'd leave headquarters to attend a job and would come across several trees and roofs across roads that you'd have to clear before moving on to the original job. Then we got hit again in 2016 resulting in a further 800 jobs, several flood rescues, mass evacuations and major coastal erosion in Collaroy. It was a very tiring but exciting 2 weeks of continuous operations for me and the Warringah/Pittwater unit.

What would be your top tip for young people who may be thinking about becoming an NSW SES Member?

You get out as much as you put in with the SES so just jump in and give it a go, there's a job for everyone in the SES and there are so many different avenues you can specialise into. I started my SES career straight out of high school with no experience or special skills. Now I'm able to help rescue people trapped in road crashes or industrial and domestic accidents, lead teams, fell trees using chainsaws, repair roofs and participate in search and rescues for missing persons just to name a few, and the NSW SES can definitely do the same for you. 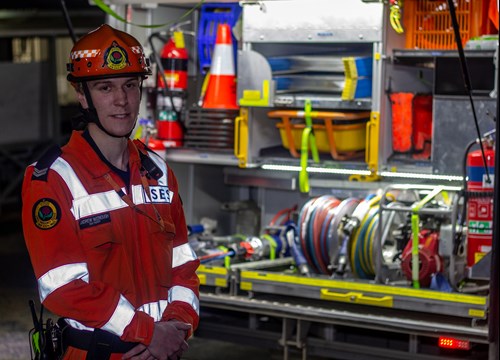 Learn more out about our various Volunteering Roles