Ways you may hear about tsunami

Tsunami Warnings will indicate a threat level that indicates whether tsunami are likely to:

To advise people that the earthquake has been assessed and that no tsunami threat exists.

In the first stage seismologists determine that there is the potential for an identified undersea earthquake to cause a tsunami threat to Australia. If there is no threat, a National Tsunami No Threat Bulletin will be issued.

To advise people that a tsunami threat may exist and that they should look out for further updates.

In the first stage seismologists determine that there is the potential for an identified undersea earthquake to cause a tsunami threat to Australia. If there is a threat, the Bureau will issue a National Tsunami Watch.

To advise people that a tsunami threat does exist and to advise them of the level of threat and action they should take.

If sea level observations and further data confirm the tsunami threat, or if any potential first point of impact is less than 90 minutes away, the Bureau, on behalf of the JATWC, will use its severe weather communication infrastructure to issue Tsunami Warnings for the States and Territories under threat.

Warning of potentially dangerous rips, waves and strong ocean currents in the marine environment and the possibility of only some localised overflow onto the immediate foreshore.

When the main threat has passed or if a tsunami didn't eventuate, the Bureau will issue a Tsunami Watch Cancellation or Tsunami Warning Cancellation. The relevant State or Territory emergency authority will inform the public when it is safe to return to the affected area.

In Australia you may receive an official Tsunami Warning,  however it is also important to be aware of the natural warning signs:

How are Tsunami Warnings issued?

Tsunami Watches, Warnings, No Threat Bulletins and Tsunami Watch or Warning Cancellations can be issued in a number of different ways.  Warnings may not always be issued using all of these methods.

You should always act early based on the first warning you hear.

The sources of tsunami warning could include:

Radio and television broadcasts are the most common communication tool to inform the public of a Tsunami Watch or Warning. These may be preceded by the Standard Emergency Warning Signal (SEWS).

If you are on or near a public beach, a siren like warning may be activated by Surf Life Saving NSW or council lifeguards. People in the water, or the immediate foreshore area may be instructed to evacuate and move away from the area.

A text or recorded message on your phone

A text or recorded voice message may be sent to people in the affected area. Once this message has been received, it is then advised that people follow the steps to safety. People should not wait for this message if they have heard it via other sources.

Aircraft with the ability to fly lower than normal may be tasked to disseminate warnings. This would be coordinated by the NSW SES.

Advice may come from other government agencies, emergency services and authorised persons

While the JATWC are the authoritative agency for Tsunami Warnings, local authorities and other government agencies can be a way of issuing advice on tsunami. You should also continue to listen to the radio for further advice and do not return to the evacuation zones until authorities have given the all-clear.

UHF CB, marine VHF radios and where appropriate marine satellite phones may also be used to advise marine users of any warnings.

All warnings issued by the Joint Australian Tsunami Warning Centre will be placed on the Bureau of Meteorology website. Tsunami Warnings will also appear on the NSW SES website.

Warnings issued by the Joint Australian Tsunami Warning Centre will also be shared via NSW SES social media including Facebook and Twitter.  Other agencies and local community organisations may also share warnings with their audience as well.

To provide the public, media and emergency authorities with the status of tsunami warnings nationally.

Sample of a Tsunami Warning: 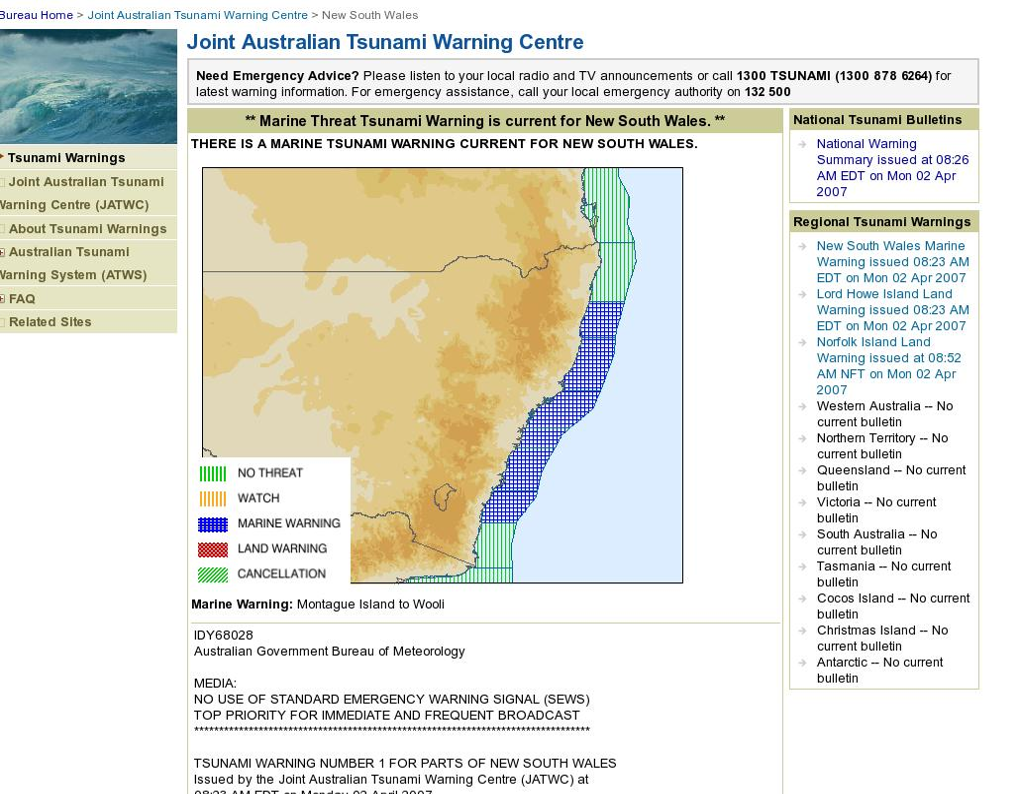