Kyle participated in NSW SES cadet program in his local area and as soon as he turned 16, he started training to become a volunteer. He was a qualified operator less than a year later and is now based at the Tweed Heads Unit, also serving Ballina Unit as a flood rescue operator.

Kyle says the friendships he’s developed are what make volunteering with the NSW SES so enjoyable and worthwhile, describing his fellow volunteers as his ‘second family.’

“I have so much respect for the volunteers I serve with. They always are willing to go the extra mile to assist, whether it be through training me up or serving our local communities. The role they play as community leaders is inspiring,” said Kyle.

He also believes that being a first responder is something that is for everybody – we can all do our part if we are willing.

“I was 16 years old when I joined. At my unit there are young people like myself, those who are older and retired, as well as a lot of others in between! However, in NSW SES we’re all treated equally. If you are capable, willing to learn and become part of a team, I highly recommend it. It’s the best adventure I’ve ever been on,” he said.

Kyle’s proudest moment was responding to the floods that impacted Ballina earlier this year. He was tasked with preparing communities by door knocking at-risk properties, also undertaking a response role through carrying out flood rescues. 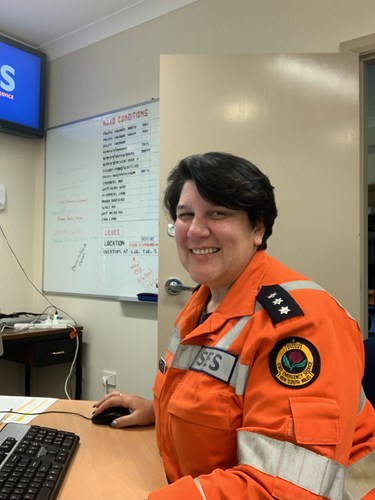 Kristine McDonald is a first responder from the NSW SES Tweed Heads unit, where she is currently Unit Commander. Kristine has been the Commander for the past 12 years, prior to being a member at Port Macquarie for three years.

Kristine originally became a first responder because she wanted to develop her skills to move into a job in emergency management. Although that didn’t eventuate, her experience at Port Macquarie Unit led her to continue her service at the Tweed Heads Unit once she moved to the area. Once walking through the doors of her local SES Unit, she immediately felt the connection with her new community.

“Being a team player and being a being a first responder goes hand in hand, it’s a team effort. Everyone who’s an SES member joins for the common goal of assisting the community. It’s about working in a structure with a highly-trained team to make a difference on somebody’s worst day.

“I love being a member of the NSW SES, and the best part about it is the team I get to work with. I wouldn’t give it up for anything,” Kristine said.

Within her role as a NSW SES member, Kristine has dedicated herself to becoming an operator in land search, storm and water damage, first aid, urban search and rescue, and is now also a trainer in these disciplines.

Kristine has led team through many significant events, including Cyclone Debbie, the 2022 Northern Rivers flooding, the enormous 1998 Sydney hailstorms incident, and has also assisted will many bush fire operations supporting the Rural Fire Service.

Kristine’s proudest moment was being recognised for her work during the Cyclone Debbie event in 2017 with the National Service Medal and her family in attendance when it was presented. Her family have always supported her in being a first responder and getting to see the efforts and commitment she puts in being rewarded.

“Being a first responder is only possible because of the support I receive from my family. For example, my husband takes the time during busy operational rescue periods to clean and press my uniform between each shift so I can get as much sleep as possible.”

“When you hear someone thank you during a job, it makes you feel like you’re really making a difference. You know all your efforts and time spent training have been worth it.

“Completing rescues with my fellow volunteers doing rescues was a feeling I’ll never forget. We were saving lives, making a difference,” Kyle said.

“I think sometimes it’s forgotten that being out there doing a rescue is only ever a small part of what it is to be a first responder. We also give so much time to training, doing admin and being on-call.

“People probably don’t realise how much saying these two simple words can mean to us. If you see a first responder today, or any day for that matter, offer them a thank you. I guarantee it’ll make their day,” Kyle said.