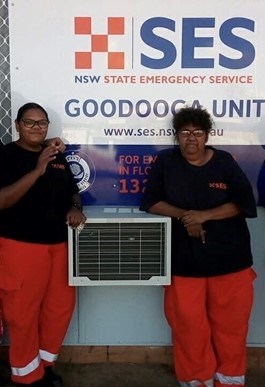 To celebrate International Women’s Day, NSW State Emergency Service (SES) is celebrating some of the amazing women who keep the community safe from floods, storms, and tsunamis. As far as role models go, they don’t come much more inspirational than Lindy Trapman.

Deputy Goodooga Unit Commander, grandmother and pillar of the community, Lindy has been volunteering with the NSW SES for almost a decade. In a united effort with the local community and now Unit Commander, Beverley, Lindy was able to establish the unit after a series of floods hit their town.

“We had three floods straight after another,” says Lindy. “Every year, for three years. No one even thought about joining the SES back then.”

The theme for International Women’s Day this year is #BreakTheBias, which is something that resonates deeply with Lindy as an Indigenous woman.

“My grandmother was part of the stolen generation,” Lindy explains.

“She’s one of the oldest surviving generation babies, she recently turned 93. She always taught me to treat people how you want to be treated. Show respect and you’ll get it back. Don’t judge anybody by the way they look.”

“My grandson is energetic,” says Lindy. “My granddaughter came to stay for a weekend a while back and never left.”

The Goodooga Unit has certainly grown from its beginnings as a temporary Unit back in 2016. They now have 14 volunteers on the books and were upgraded to a brand-new Unit building last year.

“We volunteer when there are community events. When we were in isolation last year due to COVID-19, we helped out by delivering food as well as conducting health and safety checks,” says Lindy.

Not one to shy away from standing up for her community, Lindy organised Goodooga’s first lolly drop last year, arranging for the local emergency services to drive through the town giving ice blocks, poppers and drinks to the local kids.

“We’re a small town, we’ve only got about 300 people. In the past we’ve been overlooked but I kicked up a bit of a fuss,” says Lindy.

“We put tinsel on the trucks and drove through town with Santa on the back of the fire truck. The kids were asking if he was coming back next year!”

Lindy has a simple message for any women thinking of volunteering with the NSW SES:

“Do it. I keep trying to tell the young fellas in this town, put your hand up. You’ll meet new people, get new skills. You’ll be joining the orange army. Go for it.” 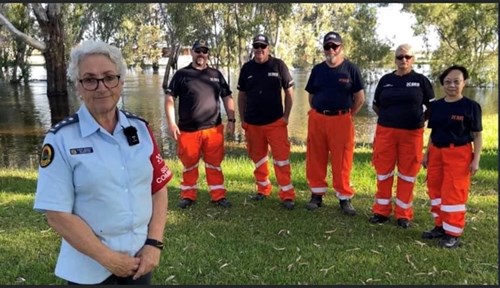 Susan Bennett comes pretty close to having done it all. She’s worked around Australia doing tourism, hospitality, nursing and admin jobs, spent five years running a pub in the middle of nowhere, opened a truck stop and even drove road trains from North Queensland to Victoria. Now, she owns a delivery business and makes time to run the NSW SES Condobolin Unit as well, helping out as Sector Commander for the recent Mid Lachlan floods.

“It was an absolute honour to me and a role that I loved,” she says.

“It doesn’t matter how young or old you are, how skilled or unskilled, no matter what you have something to offer the service and its members.”

To celebrate International Women’s Day on Tuesday 8 March, the NSW State Emergency Service (SES) is featuring some of the amazing women who help keep NSW safe from floods, storms and tsunamis. The theme this year is #BreakTheBias.

“I’ve never been one to let gender or age stop me from participating or learning something new,” Susan says.

She is an impressive role model for her 10-year-old granddaughter, who wants to be just like her Nan.

“She’s already talking about volunteering with the SES. She gets involved in community engagement whenever she can.”

Although you wouldn’t think that Susan had time for anything else, she’s also a keen Rotarian and works part-time in an engineering workshop fixing agricultural machinery.

“I have a house full of rescued cats, an injured magpie and two large dogs that keep me busy,” says Susan.

“Every Friday I join the mail delivery team and head out on a 6-hour run delivering mail and parcels to the farms north of the town.”

““My philosophy in life is never say no to opportunity and you’re never too old to learn something new. When we stop learning and growing then it’s time to move on.” 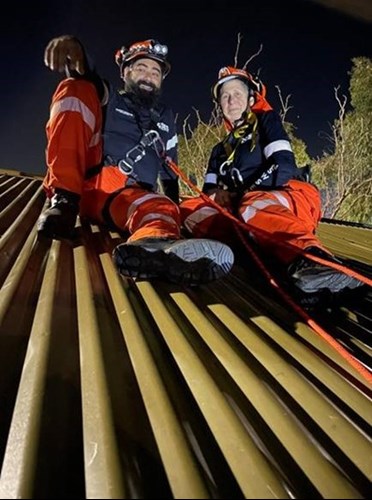 She thought that her role with NSW SES would be mostly making cups of tea and serving cake given her age. Eileen quickly discovered that couldn’t be further from the truth and that there was a role for everyone regardless of age, gender and ability.

Before joining NSW SES a little over two years ago, Eileen had a very busy life. Together with her husband they had built up and run successful businesses. She also spent some years working in real estate and many other things. In Eileen’s words “she had worked hard and earnt her retirement.”

Except she didn’t stay retired for long. She got restless sitting at home and went back to work. In 2009, life dealt Eileen a cruel blow when she was diagnosed with terminal lung cancer. She was told by her doctors to get her affairs in order and that she had less than 12 months to live.

She set about proving the doctors wrong and living life to its fullest.

Since joining the Liverpool Unit, Eileen has undertaken all available training and hasn’t limited herself to roles that would keep her at headquarters. With the support of the other members of the Liverpool Unit, Eileen has undertaken her storm damage training, most recently completing her heights training so that she can climb up on roofs when out in the field.

Eileen has undertaken some of the support roles but is most happy when she is out in the field. Nicknamed the ‘Energiser Bunny’ by other members of the unit, Eileen regularly puts her hand up to go on call outs whenever she can. “I get upset when I am not available and I miss out on jobs,” she said.

Eileen is most certainly breaking all the bias when it comes to volunteering at a time when many in her position would be sitting back and enjoying their retirement or with her five grandchildren. Eileen is one of the many amazing women that serve with NSW SES that we recognize on International Women’s Day 2022. 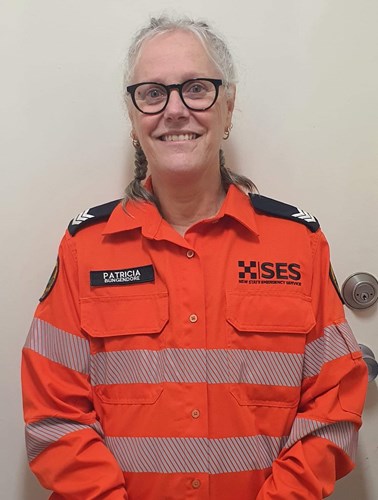 Patty Maxwell is a member of the Inland support unit and has been an invaluable member of NSW State Emergency Service (SES) for over 17 years.

Patty joined NSW SES at a time in her life when she was looking to just be Patty, instead of a being pigeonholed as a mother to her four children.

Over the last 17 years Patty, has held many roles in field and Incident Management, though her passion is as a trainer and assessor. “I love to impart my knowledge and encourage all the new recruits to step outside their comfort zone and qualify in a skill they never thought they could,” she said. Her favourite courses to train are chainsaw and leadership fundamentals.

Patty says she owes a debt of gratitude to SES – when she was diagnosed with breast cancer the support and encouragement from her team kept her going.

These days, Patty spends more time in the IMT and on-out of area deployments because she now has the time that she didn’t have when her own children were younger. “There are plenty of younger ones that can fill the field roles,” she said. “I try to encourage as many women as possible to join the field training courses.”

“There is a role for everyone and I am happy to go out to units to talk with the female unit members and encourage them to join in, even if they think they can’t,” she said.

Patty has broken many biases over her 17+ years with NSW SES and will continue to break many more in years to come.


See yourself in orange? Learn more about our volunteering roles.