'These people are heroes': South Coast woman thanks volunteers

A South Coast woman has described Shellharbour SES Unit members as "heroes" after they helped repair her home - and spirit - when a powerful storm wreaked havoc last week.

Tongarra woman Kym Aiken felt "completely deflated and defeated" when gale force winds threw a large tree on her house, leaving her with a blocked driveway, leaking roof and no power or water.

Kym said she was left with $6 to feed her family after drinking water and a flushable toilet exhausted her funds.

The Shellharbour Unit not only repaired the roof damage and gave her sandbags and a tarp, they also provided her with spare meals.

Deputy Unit Commander Ray Merz said they accidentally over-ordered food they were providing out-of-area crews with, so it was the least they could do.

The team could then repair the damage, using the in-tact roof part which simply needed to be re-attached.

But the serendipity went a long way in Kym's eyes: “I don't know their names, or what they do for a living, or if they have families, but I know what they dedicate their spare time to: the Shellharbour LGA.”

“If someone could take your completely deflated and defeated spirit and pick it up off the ground again, it's these people,” Kym said.

“I don't know them. But they deserve to be acknowledged for the endless support they give us as a community.

“I want everyone to know that we are surrounded by heroes.

“I cannot thank you enough and I am sure the rest of the community feel the same. We are lucky because we have you in our community.” 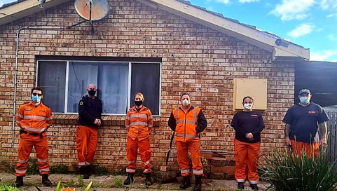 Make your HOME EMERGENCY PLAN before the next storm hits

Get Ready NSW
Back to top