In February this year, NSW Police called on the NSW SES Bush Search and Rescue (BSAR) team to help search for a missing man at a spiritually-significant mountain on the Far South Coast.

Mount Gulaga, known as Mother Mountain, is the place of ancestral origin for all Yuin people, and some areas are particularly sacred and exclusive to women only.

The rangers provided NSW SES members with access and guidance, so the teams could search the thick bush and steep, rocky slopes.

But there was a point where Ian could not take them any further. “I can take you to this point, but I’m not allowed to go past,” Ian told the BSAR crew.

BSAR team member Tjasa Boh Whiteman was part of a woman-only team who continued the search.

“Mixed-gender search teams have been the norm,” Tjasa said.

”Having women-only Land Search and Rescue teams to work in such a culturally-sensitive area was the first time ever for NSW SES BSAR, and as far as we know, NSW SES.”

She said Ian was a repository of knowledge, and was happy to answer our questions – “at least the ones he was allowed to”.

“We learnt the critical importance of early consultation and cooperation with traditional owners, who gave us insight to the sensitive environment and the lay of the land,” Tjasa said.

“Being warmly welcomed to the mountain made us feel comfortable to be in such a sensitive area, and we treated it with the respect it deserves.”

Gulaga National Park Board Chair, Ros Field, said the board was pleased to assist with the search efforts. 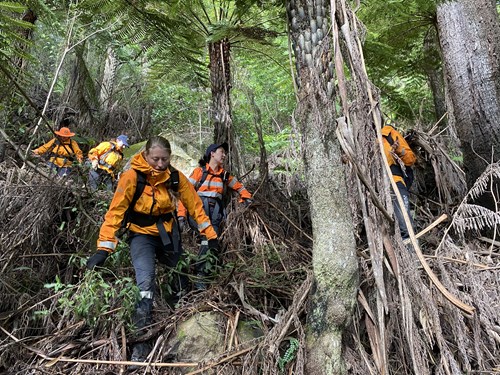