While NSW State Emergency Service (NSW SES) continues to support communities impacted by flooding in western parts of the state, the operation for flood-affected communities from the Mid North Coast, Hunter and Hawkesbury-Nepean Valley has now moved into recovery.

NSW SES Commissioner, Carlene York, said as floodwater subsided and communities were given the ‘All Clear’ to return, the service continued their efforts in these impacted areas, facilitating rapid damage assessments to ensure a seamless transition into the recovery effort being led by Resilience NSW.

“After leading the response to this significant event and responding to more than 13,500 requests for assistance, our teams coordinated and completed more than 15,000 damage assessments of properties,” Commissioner York said.

“These damage assessments are vital, as they will help inform not only the recovery for these communities but help us plan for future floods.

“I would like to thank all our partner agencies for making themselves available to work through these damage assessments as quickly as possible so Resilience NSW can now provide relief to those in need,” she said.

“Our emergency services partners have played a critical role in keeping the people of NSW safe and worked tirelessly to lay the foundation of the recovery effort ahead of us,” Mr Fitzsimmons said.

“As some areas begin to transition from response into recovery, we are focused on ensuring communities have the support they need to put lives and livelihoods back together. We urge anyone who needs assistance to attend a Recovery Centre, call Service NSW on 13 77 88 or visit www.service.nsw.gov.au.”

Commissioner York highlighted that for the volunteers of NSW SES, the floods were far from over.

“The weather systems that hit our state also affected communities in western parts of the state,” Commissioner York said.

“This is also not to mention the heavy amount of rain that occurred in southern parts of Queensland, which is now flowing into our state.

“Communities such as Mungindi, Mogil Mogil, Collarenebri and Walgett are already impacted by floodwater – or about to be – with many of the river systems surrounding these communities nearly at their peaks.

“As the floodwater continues to progress through these river systems, we need our communities further west to be prepared and be aware of their risks.

“This floodwater has already led to a number of communities becoming isolated, and heavily impacted roads.

“This is why it is incredibly important our communities in areas such as Brewarrina, Bourke, Louth, Tilpa, Wilcannia and Menindee use the time they have now to prepare,” she said.

For more information on how to prepare for storms and floods and for the latest warnings and alerts, visit ses.nsw.gov.au. 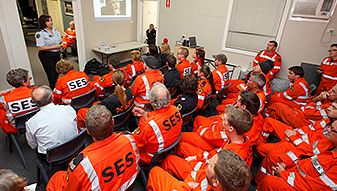