A low-pressure system looks likely to develop within a trough near the northern New South Wales coast later Saturday, and then move away towards New Zealand during Monday and Tuesday. Key period of possible impacts is Friday 19 Feb – Tuesday 23 Feb.

This low has the potential to generate strong winds, large waves and widespread showers or heavy rain for central and northern parts of the NSW coast from late Saturday.

Persistent widespread showers along the northern NSW coast and adjacent ranges may generate heavy falls on Friday, causing water to pond over roads and some river rises. Flash flooding is also a risk.

Lord Howe Island also looks to be affected by the low – heavy rain, strong and gusty winds and large waves are among the possible impacts.

This weekend Severe Weather and Severe Thunderstorm Warnings are possible and a Flood Watch and/or warnings may be issued.

NSW SES is advising people to be aware of the current weather conditions and prepare for potential thunderstorm activity, which could result in heavy rainfall causing flash flooding and river rises. 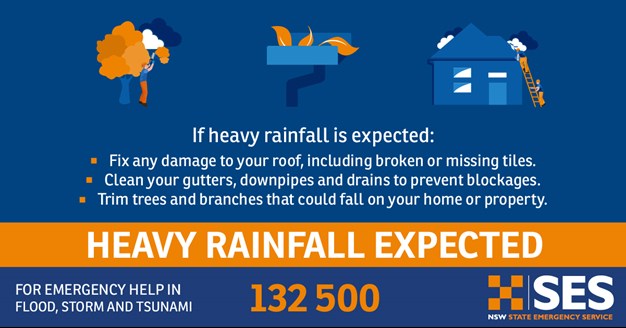 A reminder for anyone needing emergency support in floods and storms, call NSW SES
on 132 500.

If the situation is life-threatening, call Triple Zero (000) immediately.