From Kempsey to Nowra: Bill clocks up half a century with the SES

William (Bill) Curtin joined the Kempsey Unit back in 1970 while he was working for the Department of Agriculture as a Dairy Officer. He soon clocked up plenty of experience, dealing with 15 major floods over 11 and a half years as the Deputy Local Controller. Flood procedures are a passion of Bill’s and he wrote his first ones while in this position, helping the NSW SES to warn farmers when a flood was coming and giving them the chance to relocate their livestock.

Nowra Unit Commander Jo Allen has known Bill for almost 15 years and describes him as a quiet, unassuming gentleman.

“He loves passing on his knowledge about floods,” says Jo. “He can recount some very good stories.”

When work took Bill and his family down to the South Coast, he joined the Illawarra South Coast Division of the NSW SES and volunteered as a Rural Liaison Officer for roughly a decade. After he retired, Bill and his family moved to Nowra where he became the Deputy Local and Deputy Unit Controller. Not one to rest on his laurels, Bill developed the initial flood response procedures for the Shoalhaven River and Coastal Lakes, a project that took two years of research and another four years to put together. He was also instrumental in developing an early warning system for residents along the Shoalhaven River and has put together quite a resource library along the way as well.

Considering his long history of service, it’s no surprise that Bill has been on the receiving end of many awards over the years, including one to recognise his service to the community as well as an Australia Day award nomination. The latest is a Premiers Community Service Award as well as a 50-Year long service certificate and a Clasp 4.

Although Bill can’t come to musters anymore and everyone would agree that he’s well and truly earned a rest, he still works remotely from his house, analysing flood data as well as reviewing and updating procedures to ensure the information is up-to-date.

When asked whether she thinks Bill will ever retire from the SES, Jo’s answer is no.

“I think as long as Bill’s mind is capable, he will continue his flood studies.” 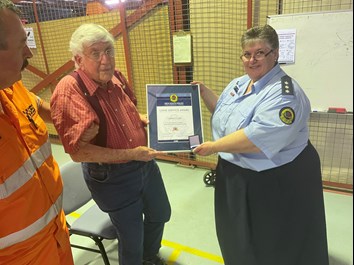 Learn more about our volunteering roles