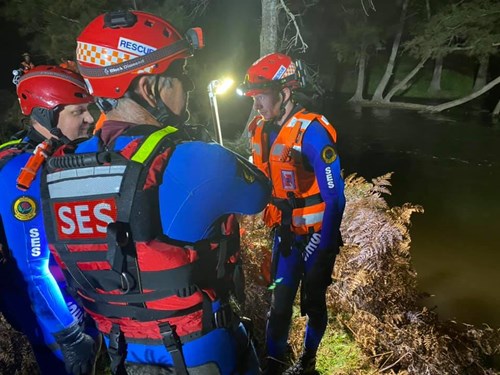 NSW State Emergency Service (NSW SES) attended to more than 680 jobs across the state over the weekend (22 and 23 August), due to damaging winds and floodwaters.

Among the hundreds of jobs volunteers attended were requests for help with damaged roofs, fallen trees and powerlines, and flood rescues.

Flood Rescue Technicians from the Bathurst and Portland Units were called to rescue two kids and four adults from an island on Lochaber Road in Capertree last night. All six people had crossed the Turon River earlier that day but couldn’t get back.

Flood Rescue Technicians ferried them back to safety in stages. All six people were checked by NSW SES Community First Responder specialists, volunteers who are trained in advanced first aid.

Flood Rescue Technicians from the Bathurst and Sofala Units were also called to Bridle Track at Hill End on Sunday after two people were stuck in their flooded car.

The volunteers tethered an Ark Angel boat to the shore, paddled out to the car and pulled the two passengers out.

Incidences like these are a timely reminder for people not to attempt to drive, ride or walk through floodwaters – they are deceptive and dangerous.


For any assistance with floods or storms, please call NSW SES on 132 500. In any life-threatening emergencies dial Triple Zero (000) immediately.