The Bureau of Meteorology has issued a Severe Weather Warning for widespread storm activity for large parts of Western and Central NSW.

Showers and thunderstorms are expected to develop across all but the far northeast and southwest of the state today, becoming more frequent about the western slopes, ranges and the central inland plains during this afternoon.

“Thunderstorms are already occurring in the far northern inland this morning and are forecast to affect a broad area of NSW today (Monday), with the exception of the northeast and southwest corners,” Mr Monk said.

“Thunderstorm activity is expected to become more frequent and intense during this afternoon and evening before gradually shifting to central and eastern parts of the state.”

Mr Monk advises people to secure or remove any loose items such as outdoor furniture, marquees and trampolines due to the potential for strong winds during the passing storm front.

“Drivers should take extreme care and drive to conditions due to the potential for flash flooding,” he stressed.

“The majority of flood rescues we attend are due to stranded motorists who, if they had taken an alternate route or waited until the flood water subsided, wouldn’t have needed to
be rescued.

People are reminded that for emergency help during floods and storms, to call the SES on 132 500, in a life-threatening emergency call 000 (triple zero). 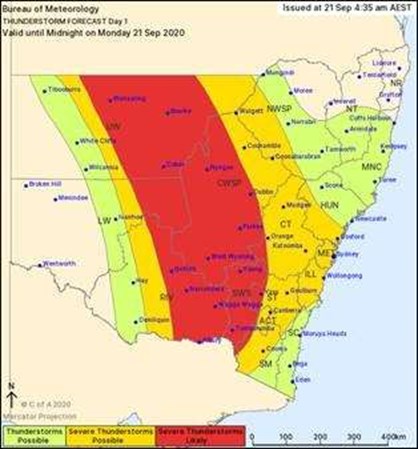 The severe weather warning issued by the Bureau of Meteorology earlier today.