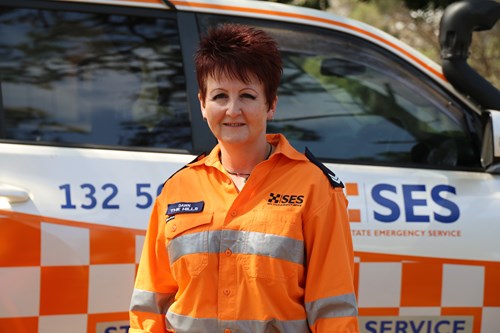 Dawn Francis knows a thing or two about giving to her local community during tough times. As a NSW SES volunteer, Dawn has regularly been called out in the middle of the night to respond to storms and flooding and has most recently assisted with the emergency response to the Gospers Mountain bushfire.

Now it’s time for the nation she has called home for the last six and a half years to give back to her, when she officially becomes an Australian citizen next month on Australia Day 2020. Dawn will be one of a lucky few whose citizenship ceremony will be held on the Royal Australian Navy’s HMAS Adelaide in Sydney Harbour.

Dawn, who is a Digital Analyst by trade, has been an active volunteer with the NSW SES Hills Unit, which she joined when she first moved to Australia from the South East of England in 2013.

“Volunteering in my community has always been a part of my life. While I lived in England, I volunteered for St John Ambulance where I provided first-aid at community events. When I first moved to Sydney I knew that I wanted to get involved in helping my local community. I love the outdoors, training and mentoring people and it was an opportunity for me to make friendships. I also live five minutes away from my local NSW SES Unit so it was the ideal fit for me,” said Ms Francis.

“To me volunteering with the NSW SES means being out on a roof in the pouring rain at 11pm at night and completely forgetting that I’m doing this work for free. It’s about just wanting to do the best to help people who have just had a tree land on their roof and who are upset and need help,” continued Ms Francis.

The NSW SES Hills Acting Local Commander, Malcolm Liston, says Dawn is an invaluable member of the Service and her forthcoming citizenship is truly worthy.

“Dawn has brought so much to our Unit since she joined the NSW SES. Dawn is involved in many activities and is always willing to raise her hand and offer help to her fellow volunteer peers and members of the community. Australia will definitely benefit from her becoming a citizen,” said Mr Liston.

“I’ll be celebrating the day by having a barbecue and a big bucket of prawns with my loved ones.  One thing I definitely won’t be doing is eating Vegemite, I’m a Marmite fan all the way and that’s never going to change – Australian or not,” said Ms Francis.