After four days of wet and wild weather lashing the South Coast, NSW State Emergency Service (NSW SES) volunteers are now focusing their efforts to help affected communities get back on their feet.

Since midnight Saturday (25 July), NSW SES received 1,116 requests for assistance from towns on the South Coast impacted by the weather, with 366 jobs still to be completed.

“On Tuesday (28 July), we undertook an aerial assessment of the affected areas to scope the damage, and gauge the resources needed to complete the remaining jobs,” Commissioner York said.

“We are now sending additional NSW SES volunteers, along with NSW Rural Fire Service (RFS) and Fire and Rescue NSW (FRNSW) personnel and forming Rapid Damage Assessment Teams to get a better understanding of the damage.

“Their primary role will be to help identify the damage to properties and local infrastructure impacted by the weather and what is needed to be done going forward.

“This will free up our volunteers already on the ground to finalise the remaining jobs,” she said.

“Our SES volunteers have been extremely busy, helping local residents in their time of need,” she said.

“They have been working around the clock rescuing stranded motorists from floodwater, attending to leaking and damaged roofs and removing trees down over roads.

Commissioner York thanked all the SES volunteers who have been on the ground since Saturday and those from other emergency service agencies now coming in to help with the damage assessments. 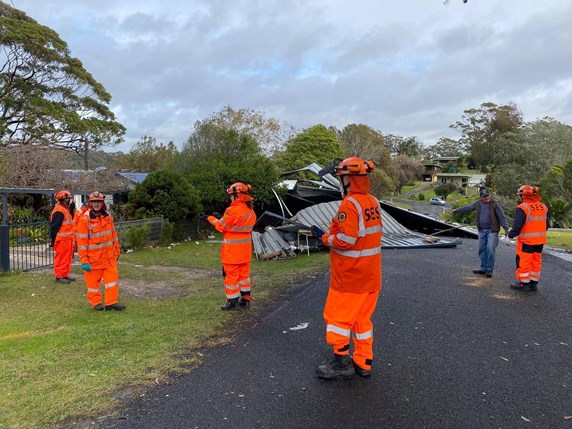 For emergency help in floods and storms, call the NSW SES on 132 500. In life-threatening situations, call Triple Zero (000).