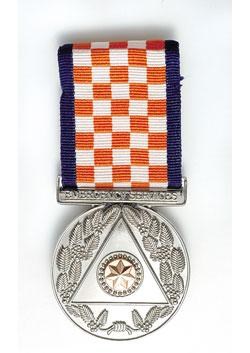 In her time with the service, Michelle has helped save lives during the Thredbo landslide, Kurnell torando, Sydney hailstorm in 1999 as well as the bushfires in 1994, 2000 and 2018.

NSW SES Commissioner Carlene York said that Michelle’s aviation skills and knowledge are an invaluable asset to all emergency services in the state.

“Michelle has been serving with the Aviation Capability Development Group and the Aviation Operations Team for many years,” said Commissioner York.

“Her expertise in the aviation field is recognised not only within the NSW SES but also in other agencies including the NSW Rural Fire Service (RFS).”

Michelle’s Emergency Services Medal will be in good company, sitting alongside her National Medal and Clasp 1, SES State Medal for the Hunter/Sydney Northern Storms, NSW SES Commissioner’s Commendation for Service and NSW SES Commissioner’s Certificate of Appreciation as well as her 5,10,15, 20- and 25-Year Long Service Awards.

Michelle has been Deputy Unit Commander of the NSW SES Sutherland Unit for eight years, lending her knowledge to other Unit Commanders in the Shire. She has a Certificate III in Public Safety and has completed more than 100 individual courses of different competencies, giving her 28 different skill sets.

“Michelle is a dedicated, decorated veteran of the NSW SES,” said Commissioner York.

“I’m pleased that her years of hard work as a volunteer and community-minded spirit have been recognised.”