More wet weather on the way for already saturated communities

Don’t put your umbrella away just yet. While the trough which caused havoc along the coast has eased, thunderstorms are predicted to move in.

The Bureau of Meteorology is predicting showers and thunderstorms (possibly severe) anywhere east of the inland trough over the next few days. Further heavy rainfall is possible in some areas with these thunderstorms, including the possibility of more storms in the North East, Mid North Coast, Illawarra and South Coast from this afternoon and into the next few days.

The Bureau of Meteorology have indicated that flash flooding and further riverine flooding is possible as many catchments remain saturated due to the recent heavy rainfall.

The NSW SES is advising communities who have already been impacted by the recent heavy rain to brace for the potential for more damage.

“The NSW SES is urging residents who have already felt the effects of torrential rain over the last few days, to remain vigilant as thunderstorms producing more rain and wind are forecast,” said NSW SES Public Information Officer David Webber.

“It is important that you make sure you plan for the upcoming severer weather and make sure that your properties and businesses are safe. If you have already used sandbags from the NSW SES from the last severe weather, keep them and reuse them again as the potential for more floodwater is a real risk.”

“Never drive, ride or walk through floodwater. It’s too dangerous – and you never know how deep they are, the condition of the road or how fast the water is flowing."

“Please keep clear of drains, creeks and causeways and if you are in a flood prone area avoid parking vehicles in low-lying areas,” continued Mr Webber. 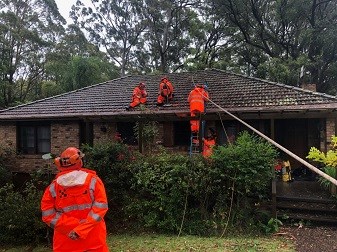