Couple say no to retirement, embracing chainsaws and volunteering instead

When NSW SES member Janet first joined the organisation, she had no idea that 7 years later she’d be happily receiving a chainsaw as a birthday gift from her husband.

“Chainsawing is something that I would never have thought to do before I became a member of the SES. Why would I even want to touch a chainsaw?” said Janet, whose husband Chris is the current Commander at NSW SES St George’s Basin Unit.

“The SES has challenged me and taken me in directions I never thought I’d go, and chainsawing is one of the new skills that I’ve learned along the way. When Chris gave me a chainsaw for my birthday I loved it!”

Janet said she decided to volunteer when she found retirement uninspiring.

“When we retired I thought: ok, what’s next? Do we just go and buy a newspaper and a coffee every day and sit down, and that’s it? We would be so bored. This is the start of life, not the finish,” she said.

“So I started with NSW SES at Nowra about three weeks before Chris did. I said ‘come on, give it a go – we need to get involved with the community.’ So he did, and here we are all these years later.”

Prior to retiring Janet worked for many years in health services and Chris was a school teacher.

Together they have raise two children and are now proud grandparents of three.

Janet said she enjoys working alongside her husband because they ‘balance each other out really well’ – and Chris agrees.

“We have a lot of fun working together,” he said.

“And now that she’s got the chainsaw skills she can cut all the firewood in winter.” 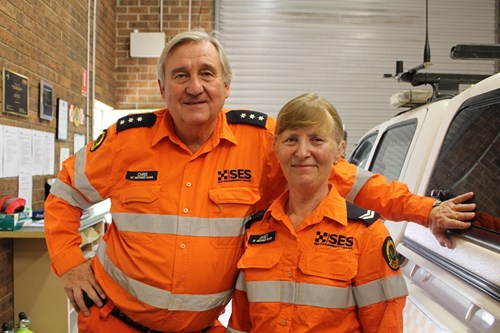