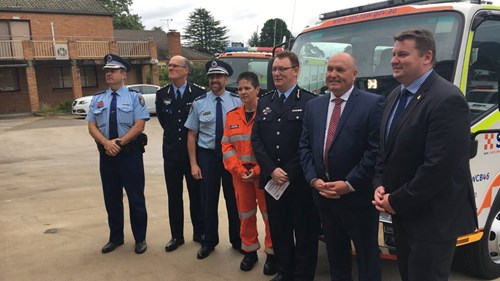 The Wingecarribee SES unit officially have a brand new truck.

Minister for emergency services and police, David Elliot, officially handed over the keys to a new rescue truck to the SES unit.

"We could not provide the level of safety in the state of NSW without the 8000 SES volunteers," he said.

"You have a very special role to play and that's why we have to make sure your training and equipment is up to speed as fast as possible."

The new truck is a significant boost to the unit's capability to respond to road crashes, storm damage, and land searches. The truck is lighter, with a better layout than the old vehicle and is considered to be the 'workhorse' of the fleet.

Interim SES commissioner Kyle Stewart, who is also the NSW Police Force assistant commissioner was proud of the Wingecarribee unit.

"You have a look at across the people here today and they reflect the community. They are absolutely committed to the community they serve," he said

"I couldn't be prouder of this particular unit, you reflect the very best of the SES."

Wollondilly MP Nathaniel Smith said the new unit would be put to good use across the region,

"The Wingecarribee unit is one of the busiest NSW SES rescue units," he said.

"It's 120 members cover a large area, including parts of the Hume Highway, so they need the best resources they can get."

The Mittagong based unit covers an area of 2500 km squared, from Bargo to Paddy's River and across to the coastal escarpment.

This article was originally published on Southern Highland News and was republished here with permission. Link to article here: https://bit.ly/2Y4HXeq


Thinking about becoming a member but not sure what you'd like to do? Find out about our various volunteering roles